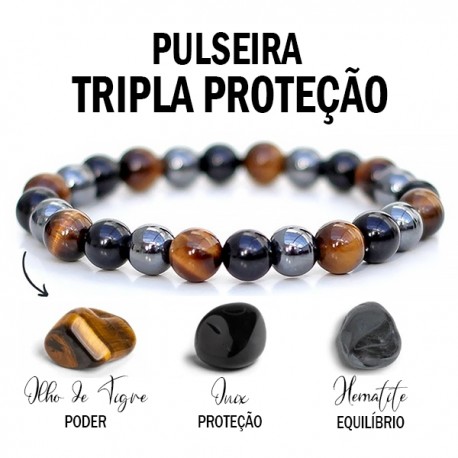 Unisex bracelet.
Combining three of the most protective stones in one piece, this is the only spiritual line of defense you really need!

This product is no longer in stock

OLHO DE TIGRE is part of the large family of quartz and is found in abundance in South America, Western America and Africa.
The Tiger's Eye is said to give the gift of sight. For the Egyptians it was the symbol of divine vision and they used this stone to make statues representative of their gods.
This stone acts on the digestive system, namely on the pancreas.
The Tiger's Eye symbolizes all cyclical phenomena such as alternating between night and day. It is also a symbol of the attraction of opposites. Provides lucidity and humility.

Properties: Helps to recognize our internal resources and use them to go through difficult times. Attracts luck and is excellent for fighting the evil eye and feelings of envy.
Onyx establishes harmony between body and soul, between Yin and Yang, thus providing more resistance, stability and joy of living. It fights melancholy, depression and drives away people who want us badly or black magic.
It is also widely used in the ability to concentrate, beauty, self-respect, self-control.
Health: Joints, hair, bones, cartilage, nails, ears and cells.
HEMATITE can be found in Venezuela, Canada, the United States, India, Africa and Italy.
From Ancient Egypt to the Middle Ages, Hematite has been given specific virtues for almost all situations. Associated with Heliotrope, it had the power to make invincible and ward off evil spirits. It made the body and spirit more alert and ensured a more active sex life. It also guaranteed its users a long life.
The physical effects of Hematite are beneficial, especially for the circulatory and nervous systems. In Chinese medicine Hematite is used mixed with red clay to treat liver attacks, dizziness, headaches and vomiting.
Hematite is a stone that acts on individual charisma and symbolizes the connection to material goods.

Effects: Improves self-esteem and facilitates autonomy. In the Roman army, a talisman made of Hematite was supplied to soldiers in order to increase their courage.